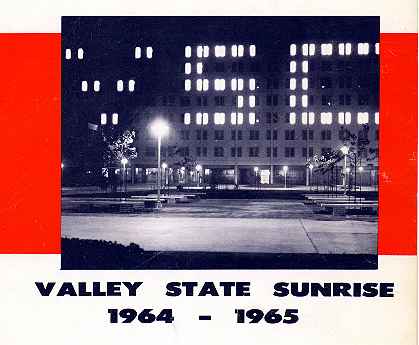 A new building was going up, but that happened all the time at Valley State in those days. Each year the campus grew 2000-3000 students and there had to be classrooms and other facilities for this incredible growth.

It was in the evening in early spring in 1964 and Rick Turton was studying in the Library. As he studied, he couldn't help but notice lights going on and off in this new building that we'd heard would be called Sierra Hall. He watched with growing interest as lights went on and off, office by office, window by window, floor by floor. He got an idea. He sketched it out on paper. It could work.

Turton walked over and discovered that the electricians on the night shift were testing the wiring in the new office tower. The sort of guy who made friends easily and everywhere, Turton talked the electricians into allowing him to set up an elaborate fraternity prank. He ran back to the library and to the cafeteria and rounded up several brothers. He took them over to Sierra Hall. With the master powerswitch off, Turton then got them to work going to specific offices and turning the light switches on, and then to other offices to turn the switches off. When all was ready, he told them to go out in front of the building and just watch.

proudly. There was great cheering. The lights were left all night long.

The next morning Dean Robert S. Lawrence sent out the word: He wanted to see the man who set up this prank. And he wanted to see him immediately. Seeing the Dean was quite intimidating, but Turton buckled up his courage and went to his office.

Dean Lawrence explained that he thought that was the best thing he'd ever seen or heard of. Furthermore, he wanted to know if Turton could set up the same thing but spell out the college initials: SFVSC. Turton had already thought of doing that, actually, so he replied that only VSC would fit. Dean Lawrence said that was good enough for what he had in mind.

Turton got the work crew organized and set it up, and the Dean got the college photographer to take pictures of it. Until the offices in the tower were occupied later that year, VSC frequently lit up the night--you could see it for miles.

The picture eventually became the cover of the Sunrise student orientation handbook, which John Cagle edited. As a matter of fact, Dean Lawrence liked it so much he had 2000 extra copies of the cover printed so they could be used as covers for conferences at the college.

This story and the names have not been changed to protect anyone.