Here is a sad story of six brothers playing poker at one of the Pismo Reunions. True, we dunna like to talk about this story, but time and again we need to be reminded. Only a few names will be mentioned in order to tell the tale. 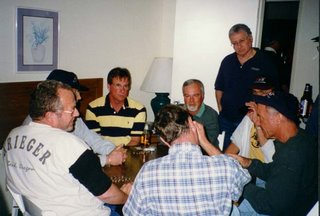 Brother Paddy Murphy loses $500 on a single hand, clutches his chest, and drops dead on the table. Brothers Adams, Sparks, Costanzo, Hayes, and Wenguer are shocked.

Brother Turton, who has been watching, says, "Oh, bro's, someone has got to tell Paddy's wife. It is the only thing to do. Who will it be?"

Unable to decide, Brother Roberts suggests that they draw straws. Brother Hayes picks the short one.
As Brother Hayes prepares to drive to Paddy Murphy's house, the other brothers tell him to be discreet, be gentle, and not to make a bad situation worse.

"Discreet? I'm the most discreet brother you'll ever meet. Discretion is my middle name. Leave it to me, and don't give away my chair at the table while I am gone."

So it is that Brother Hayes goes to Paddy Murphy's house and knocks on the door. Mrs. Murphy answers--it being late at night, she is dressed in a robe with curlers and cold cream all over her face--and asks Brother Hayes what he wants.

Brother Hayes declares: "Your husband just lost $500 and is afraid to come home."

And that is the true tale of how Brother Hayes returned to the poker game that fateful night. The guilt Mrs. Murphy bears to this day is a lesson to us all.