This brochure is intended to present to the members of Sigma Alpha Epsilon information about the eleven local fraternities that will be seeking charters at the 111th National Convention on June 18 to 21, 1967 in Minneapolis, Minnesota. 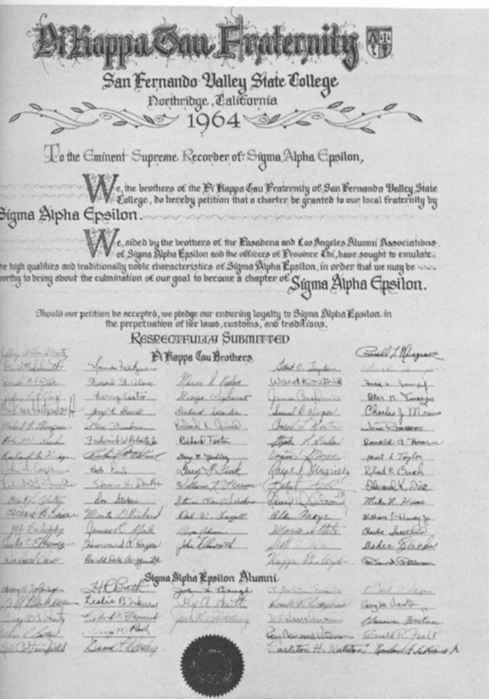 San Fernando Valley State College, founded in 1958, is one of the eighteen campuses of the California State Colleges, which represent the largest system of public higher education in the Western ' Hemisphere. There are 180,000 students currently enrolled in the state colleges and approximately 9,000 faculty.

Located in Northridge, California, San Fernando Valley State College, currently has 14,000 students with a projected growth potential of 33,000. The college is organized into five academic schools: Business and Economics, Education, Engineering, Fine Arts and Professional Studies, and Letters and Science. The college offers the Bachelor of Arts degree in 24 majors, the Bachelor of Science degree in 8 majors, the Master of Arts degree in 13 majors, and the Master of Science degree in 6 majors. In addition, the School of Education has an extensive teacher and administrator training program, granting both credentials and master's degrees.

San Fernando Valley State College is a member of the California Collegiate Athletic Association (CCAA). The strength of the Matadors increases in all sports each year. Many are distinguishing themselves in football, but quarterback Bruce Lemmerman has broken all records to become the Number One small-college quarterback. In gymnastics Valley State has the national champion on the high bar, All-America Rusty Rock. The Matadors also field teams in basketball, tennis, golf, wrestling, track and field, water polo, swimming and baseball.

The student life program at San Fernando Valley State College is conducted by the Associated Students, Incorporated, in harmony with the office of the Dean of Students. The Associated Students has an annual budget of $260,000, through which it sponsors: the student newspaper, the student handbook, the yearbook, drama and music productions, forensics, intercollegiate and intramural athletics, art exhibits, lecture and film series, new student orientation, Homecoming, State Fair, Spring Sing, Men's and Women's Weeks, and a full calendar of social and recreational functions. The Associated Students also charters more than a hundred clubs and organizations.

The Associated Students has a significant role in the government of the college. Students serve on administrative and faculty committees in all areas, providing a constant communication between students and the college.

One of the major programs of student government has been housing for our campus, Currently there is campus housing for 1200 men and women in modern facilities. Construction will soon begin on a housing complex for 4500 married students and 5000 single students. Near culmination is the fraternity-sorority housing development, which has been under the auspices of the college and the Interfraternity and Panhellenic Councils. Two other projects are also foremost in our attention. The Associated Students is working toward the construction of a College Union building and a 40,000 seat stadium.

Pi Kappa Tau is a member of a young and vigorous Greek community. In 1966 the Interfraternity Council won the Western Regional Outstanding IFC Award and the Intersorority Council is affiliated with the National Panhellenic Council.

The two councils are united by the Committee on Greek Activities (COGA) which sponsors Greek Week, the Greek Newsletter (Helios), the Greek Retreat, Greek Man and Woman of the Year Awards, and numerous projects throughout the year.

The Interfraternity Council is very active in community affairs, belonging to the Northridge Chamber of Commerce and has frequently held benefits for worthy charities.

Fraternity men are an integral part of campus life. Of the students involved in student government 91 per cent are members of a fraternity or sorority. Greek men are to be found in every area of campus life, including athletics, forensics, and scholastic societies.

Pi Kappa Tau was founded on July 2, 1961, by seventeen men whose goal was to establish a unique and dynamic fraternity, one in which the ideals are descriptive of its actions rather than goals to which the actions are directed. The men f Pi Kappa Tau have built a strong fraternity on the San Fernando Valley State College campus. Its record of success is one which inspires pride in the ast and dedication for the future.

The Pi Kappa Tau philosophy of fraternity is simple. A fraternity is an association of young men who develop a close bond of fellowship. The many friends and the activities they do together make Greek life a meaningful part of the college experience.

During pledgeship a young man is introduced to the philosophies and ideals f Pi Kappa Tau. The goal of pledgeship s to combine the standards and attitudes f a gentleman with youthful enthusiasm produce a brother who is dedicated to is fraternity, his college, and his country.

In 1966 Pi Kappa Tau began negotiation to purchase property and build a house on Valley State's fraternity-sorority row. Currently the fraternity pies a house in Chatsworth that accommodates twenty-two men, and it has two supplementary houses for twenty men.

The social program of Pi Kappa Tau is well balanced so as to provide plenty of good times and a scholastic atmosphere. The fraternity always participates fully in the college and all-Greek affairs, such as Homecoming, Greek Week, the Greek Ball, Spring Sing, and State Fair. The house social calendar has numerous theme parties, exchanges Nvith sororities, joints with fraternities, trips, and picnics. The brothers field teams in all the intramural sports. The two big parties of the year are the Paddy Murphy in the winter and the Anniversary Party in the spring. On March 9, the brothers gather in a solemn toast in tribute to Sigma Alpha Epsilon.

In the past four years Pi Kappa Tau has won thirty-eight college trophies in competition with the other fraternities. The trophies were won in all areas of college life, from athletics to scholarship to singing to float building. The Pi Kap athletic teams won the college and Interfraternity intramural high point trophies for the last three years and currently are well on the Nvay to a fourth championship. Led by the Pi Kap Engineering Squadron, the fraternity won the homecoming sweepstakes four times in the past five years. Pi Kappa Tau won the Interfraternity Scholastic Trophy three times, in 1963, 1964, and 1966.

The most distinguished honor Pi Kappa Tau has received has been the Dean's Trophy, which has been presented by the Dean of Students each year since 1964 to "the most outstanding Greek organization on campus." Pi Kappa Tau was given this award each time it has been awarded, in 1964, 1965, and 1966.

Pi Kappa Tau has also shown a concern for other people. The Harmony Park Camp for Neurologically Handicapped Children was adopted as the fraternity's permanent charity, and through the years the fraternity has contributed time, money, and gifts to it. In 1965 the fraternity held the "Parade of Sounds" benefit, packed the college gymnasium, and donated a Volkswagen bus to the camp. Another favorite project of the brothers has been to hold an annual Christmas party for a West Los Angeles orphanage. The brothers have also aided the Red Cross and the Heart Fund whenever asked.

The brothers of Pi Kappa Tau unanimously resolved in April of 1963, after an extensive study of national fraternities in America, to dedicate themselves to the goal of becoming a chapter of Sigma Alpha Epsilon. To this end, they immediately began a program of preparing themselves to become worthy of this honor. The brothers wish to acknowledge their appreciation of the counsel and guidance afforded to them by the National Office, Province Chi, and the Pasadena Alumni Association. The faculty advisors have been Dr. Arthur Taitt (Indiana Gamma '57) and Dr. Gerald Wyness (Nevada Alpha '50), and the undergraduate advisor has been Jon Foley, who transferred from New Mexico Alpha. 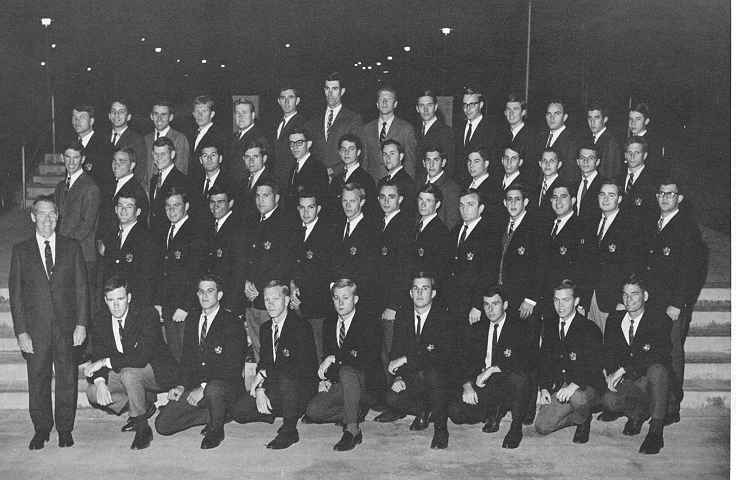 To Whom It May Concern:

Pi Kappa Tau Fraternity of the San Fernando Valley State College is one of the sponsoring groups actively supporting Camp Harrnony. In the highest tradition of Greek society community service, Pi Kappa Tau has given freely of its time, energies and facilities to provide a summer program for neurologically handicapped children. Specifically, they have

It has been a privilege for me to be associated with these young men during the past two years. I hope that their continued good works bring them the recognition and rewards they so richly deserve.

It is my pleasure to write on behalf of the Pi Kappa Tau Fraternity. Since its inception on our campus, in fact for a year before its actual birth, I have had the opportunity of associating with the men of this house.

The fraternity system at San Fernando Valley State College is young, yet we are very pleased with some of the rapid development that has taken place. Some large share of the credit for this growth and maturation must go to the leadership as expressed by various members of Pi' Kappa Tau.

As I am certain you will note when reading the long list of accomplishments achieved by the fraternity, the diversification and consistent high quality of performance by this group lends itself for positive recommendation.

The future of San Fernando Valley State College is bright and shining, both from an enrollment and facility point of view. We believe that Valley State will shortly be numbered among the leading academic institutions in the far west, and I can foresee only an increase in the Greek movement on this campus.

It is without hesitation that I recommend Pi Kappa Tau and San Fernando Valley State College to you for your sincere and careful consideration.

We, the officers of PROVINCE CHI, heartily recommend that Pi KAPPA TAU of San Fernando Valley State College, be granted a charter of SIGMA ALPHA EPSILON at the 1967 National Convention in Minneapolis. 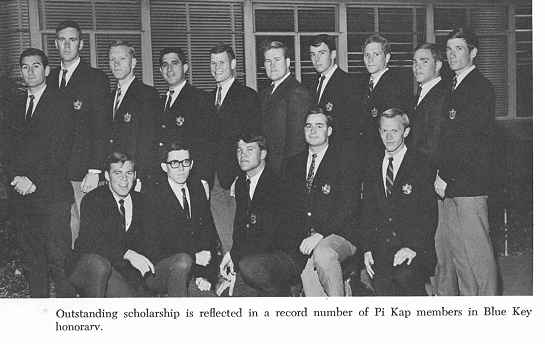