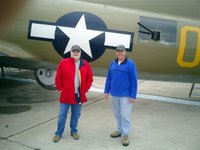 On this weekend fittingly our thoughts go to those who have served to protect our country. Many of our own fraternity served in the Army, the Air Force, and the Navy during the Vietnam War, and we honor them. My own brother Robert went to Vietnam and served at Long Binh.

At the 2003 Pismo Retreat we all meandered here and there on brotherly adventures. I went with Bob Fowlie and John Ellsworth. Bob wanted to see a WWII air show at the Pismo airport, so we went. Undaunted (well, truthfully, a bit daunted) by the high admission charge to see the old planes, we went in. We climbed into the bombers (they all had been restored and really could fly) and literally crawled through the various parts of the plane. The scale of the plane is very small in real life--everything seems so large in the movies. I remember remarking to Ellsworth about how courageous it was to actually fly in these bombers--so huge on the outside--so small and spartan on the inside. We all got out of the planes and walked around each, admiring among other things the sexy girl of a plane's namesake painted at the front. It was then that Bob revealed something I will never forget. He pointed to one of the bombers, and he said his father, shortly after he was born, flew in one of these models during the war and was killed in service. He was in the Canadian Air Force. He thanked us for visiting it with him. John and I thanked him for sharing the moment with us.

On this weekend, we should remember Bob's father's great sacrifice.

I am also mindful of the fact that our own mothers and fathers and aunts and uncles served too in WWII. My father met my mother in an Army hospital where she was a nurse. My wife Eve's father was an artillery officer who served in Africa and in Europe in harm's way, and he was poised on a Japanese island for the first wave of the invasion of Japan when news came that an atomic bomb had been dropped.

The political side of war has always been contentious, but the debt we owe to those who have served us so well is manifest.